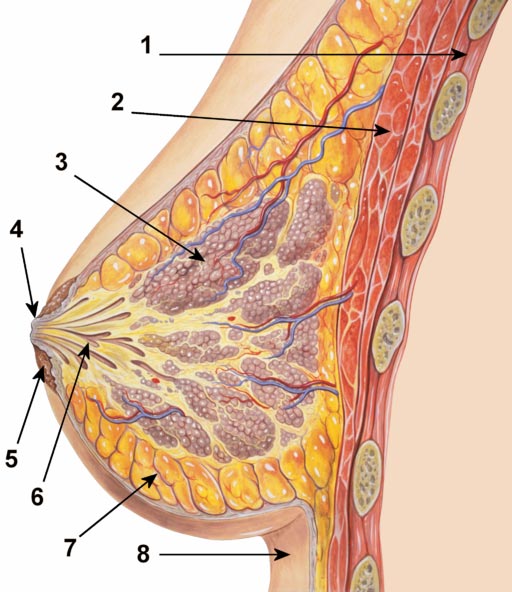 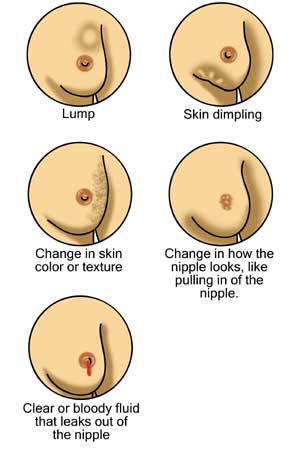 A symptom is only felt by the patient, and is described to the doctor or nurse, such as a headache or pain. A sign is something the patient and others can detect, for example, a rash or swelling.

The first symptoms of breast cancer are usually an area of thickened tissue in the woman's breast, or a lump. The majority of lumps are not cancerous; however, women should get them checked by a health care professional.

Women who detect any of the following signs or symptoms should tell their doctor (NHS, UK):

☛ A lump in a breast
☛ A pain in the armpits or breast that does not seem to be related to the woman's menstrual period
☛ Pitting or redness of the skin of the breast; like the skin of an orange
☛ A rash around (or on) one of the nipples
☛ A swelling (lump) in one of the armpits
☛ An area of thickened tissue in a breast
☛ One of the nipples has a discharge; sometimes it may contain blood
☛ The nipple changes in appearance; it may become sunken or inverted
☛ The size or the shape of the breast changes
☛ The nipple-skin or breast-skin may have started to peel, scale or flake.

Experts are not definitively sure what causes breast cancer. It is hard to say why one person develops the disease while another does not. We know that some risk factors can impact on a woman's likelihood of developing breast cancer. These are:

Getting older: the older a woman gets, the higher is her risk of developing breast cancer; age is a risk factor. Over 80% of all female breast cancers occur among women aged 50+ years (after the menopause).

Genetics women who have a close relative who has/had breast or ovarian cancer are more likely to develop breast cancer. If two close family members develop the disease, it does not necessarily mean they shared the genes that make them more vulnerable, because breast cancer is a relatively common cancer.

The majority of breast cancers are not hereditary.

Women who carry the BRCA1 and BRCA2 genes have a considerably higher risk of developing breast and/or ovarian cancer. These genes can be inherited. TP53, another gene, is also linked to greater breast cancer risk.

Having had certain types of breast lumps women who have had some types of benign (non-cancerous) breast lumps are more likely to develop cancer later on. Examples include atypical ductal hyperplasia or lobular carcinoma in situ.

Estrogen exposure women who started having periods earlier or entered menopause later than usual have a higher risk of developing breast cancer. This is because their bodies have been exposed to estrogen for longer. Estrogen exposure begins when periods start, and drops dramatically during the menopause.

Obesity post-menopausal obese and overweight women may have a higher risk of developing breast cancer. Experts say that there are higher levels of estrogen in obese menopausal women, which may be the cause of the higher risk.

Alcohol consumption the more alcohol a woman regularly drinks, the higher her risk of developing breast cancer is. The Mayo Clinic says that if a woman wants to drink, she should not exceed one alcoholic beverage per day.

Certain jobs French researchers found that women who worked at night prior to a first pregnancy had a higher risk of eventually developing breast cancer.

Canadian researchers found that certain jobs, especially those that bring the human body into contact with possible carcinogens and endocrine disruptors are linked to a higher risk of developing breast cancer. Examples include bar/gambling, automotive plastics manufacturing, metal-working, food canning and agriculture. They reported their findings in the November 2012 issue of Environmental Health.

Cosmetic implants may undermine breast cancer survival women who have cosmetic breast implants and develop breast cancer may have a higher risk of dying prematurely form the disease compared to other females, researchers from Canada reported in the BMJ (British Medical Journal) (May 2013 issue).

The team looked at twelve peer-reviewed articles on observational studies which had been carried out in Europe, the USA and Canada.

Experts had long-wondered whether cosmetic breast implants might make it harder to spot malignancy at an early stage, because they produce shadows on mammograms.

In this latest study, the authors found that a woman with a cosmetic breast implant has a 25% higher risk of being diagnosed with breast cancer when the disease has already advanced, compared to those with no implants.

Women with cosmetic breast implants who are diagnosed with breast cancer have a 38% higher risk of death from the disease, compared to other patients diagnosed with the same disease who have no implants, the researchers wrote.

After warning that there were some limitations in the twelve studies they looked at, the authors concluded "Further investigations are warranted into the long term effects of cosmetic breast implants on the detection and prognosis of breast cancer, adjusting for potential confounders."