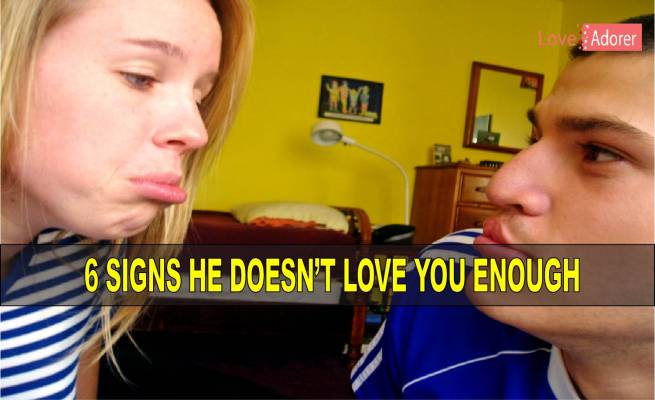 Having a boyfriend in your life is very often a big blessing. They love you, take care of you and be there for you. It is almost live having a guardian angel over you because they protect you and become your strength. However, things become difficult when you don’t get the love you deserve because you end up feeling alone and at a distant from the other person. Here are a few signs which show that they don’t love you enough.

6. He Ignores you.
You feel like he does not love you enough because he ignores you when you call him or text him. He has his phone in his hand all the time and you see that he is addicted to his phone but every time you text him, he will not reply on time. He will take ages to reply and his replies will usually be brief. His replies would only be “yes” or “no” or a simple “okay”.

5. You think he doesn’t find you pretty.
He fails on doing the basic little things which show that he does not love you enough. When a guy really loves you, he will remind you every day that he finds you beautiful and that he thinks you are beautiful. However, this guy will never tell you that. He will hardly mention it to you because he just doesn’t care about you enough to go all gaga over you.

3. He doesn’t encourage you.
He does not love you enough when he doesn’t encourage you. When you have a boyfriend, you know that you can have your emotional breakdowns in front of them because they will gather all your pieces and make you feel good. However, with this guy, he wouldn’t be there to support you in any form. You can’t count on him if you have left you wallet at home and you suddenly need cash. You can’t count on him if you miss your dead grandmother and need a shoulder to cry on. He’s just never there!

2. He doesn’t appreciate you enough.
When you compare him with your friends, and they praise you more than him, then he doesn’t love you enough. He will never compliment you. When you are in a relationship, you become big fans of each other. Ask me about my person and I can write books on them because all their imperfections and perfections seem priceless to me. Yet if they cannot be like that for you, do they even love you enough?