Read Here: 7 Things that will make your Boyfriend Brag about you 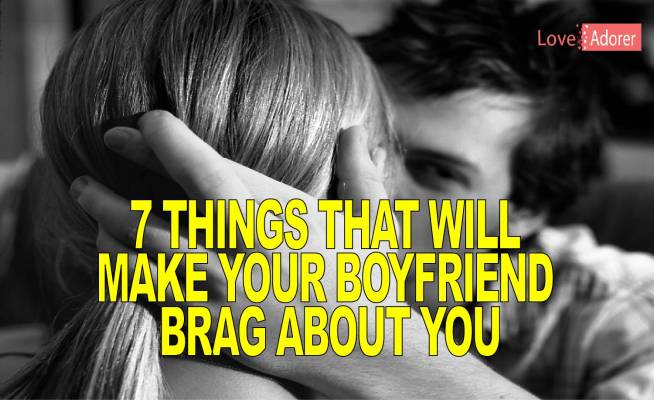 8. “My girlfriend is really chill!”
He tells you he is going out for a boys’ night out and instead of fussing over it, you let him go. There is no point in getting angry or annoying him because he deserves to spend some time with his guys too. It is nice that he told you because he considers you important. So every once in a while, you should be chill and you let him go. That will definitely make you boyfriend brag about you.

7. “Our dates are always fun!”
Your amazing dates could make your boyfriend brag about you. If you both spend time together and do things that both of you like, then he is surely going to enjoy them enough to show off about you. I am not saying that your ideas of dating should always be what he chooses, but going go-karting or bowling at times with him won’t be that bad.

6. “She is a successful woman!”
Your work achievements and your successes are somethings that will definitely make your boyfriend brag about you. A lot of women think that their men do not want to see them over achieve or to better than them at work, but the truth is that they actually like it!

5. “We watch football together!”
If you enjoy are into the few things are strongly labelled as boys’ stuff then know that you have the perfect reason that will force your boyfriend to brag about you. Imagine how much he’d enjoy watching his favorite football club play while you’re with him or how much fun your games on PlayStation or Xbox would be!

4. “You know how we met? Well, that’s an interesting one…”
This is something you have no control over, of course, but an interesting story about how you guys met could make your boyfriend brag about you. He would really enjoying sharing these details with his friends if the story is even remotely funny and this just shows how he considers it to be an important event.

3. “Last night, we just went mad partying!”
Do you guys still party like you are two young ones in love? Partying all night and chilling in bars and pubs will surely make your boyfriend brag about you. He enjoys your company and getting a chance to be all adventurous and crazy with you. This should just show you how amazing you are to him.

2. “She has never checked my phone!”
If you trust him then you should know that you have given him enough of a reason and it makes your boyfriend brag about you. The ability to trust a human is very special and I think that if you love someone then you should trust them as much as you can, because it will make him happy and chances are that he will be less prone to breaking your trust.

1. “She is a brilliant chef/painter/writer/poetess etc.”
If you have a skill that makes you standout, then know that it makes your boyfriend brag about you. He thinks that you are super talented and he makes sure that his close friends know it too. He is just so proud of you