Advertisement
She started a blog and a YouTube account and was posting all over social media when she was in high school. It wasn’t long before this completely consumed her life. She became a widely known online sensation garnering over half a million followers on Instagram and over 250,000 YouTube subscribers.

“I fell in love with this idea that I could be of value to other people,” she wrote. “Let’s call this my snowballing addiction to be liked by others.” 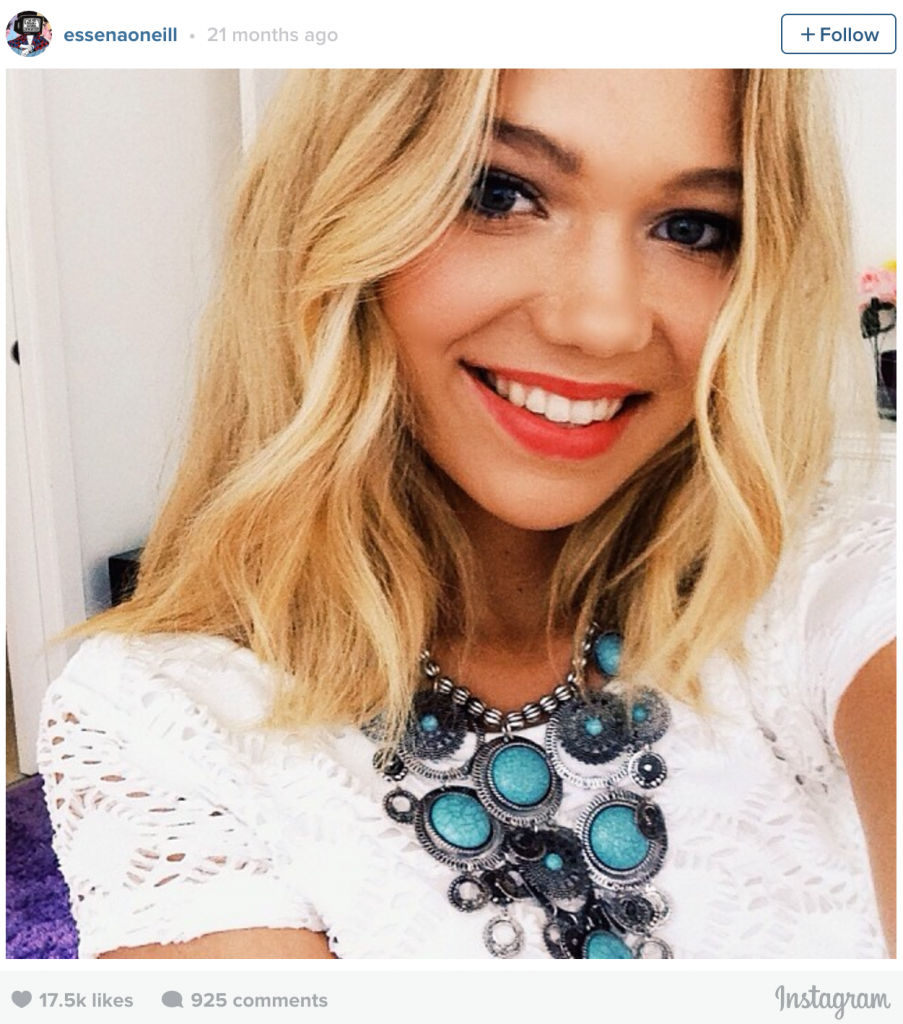 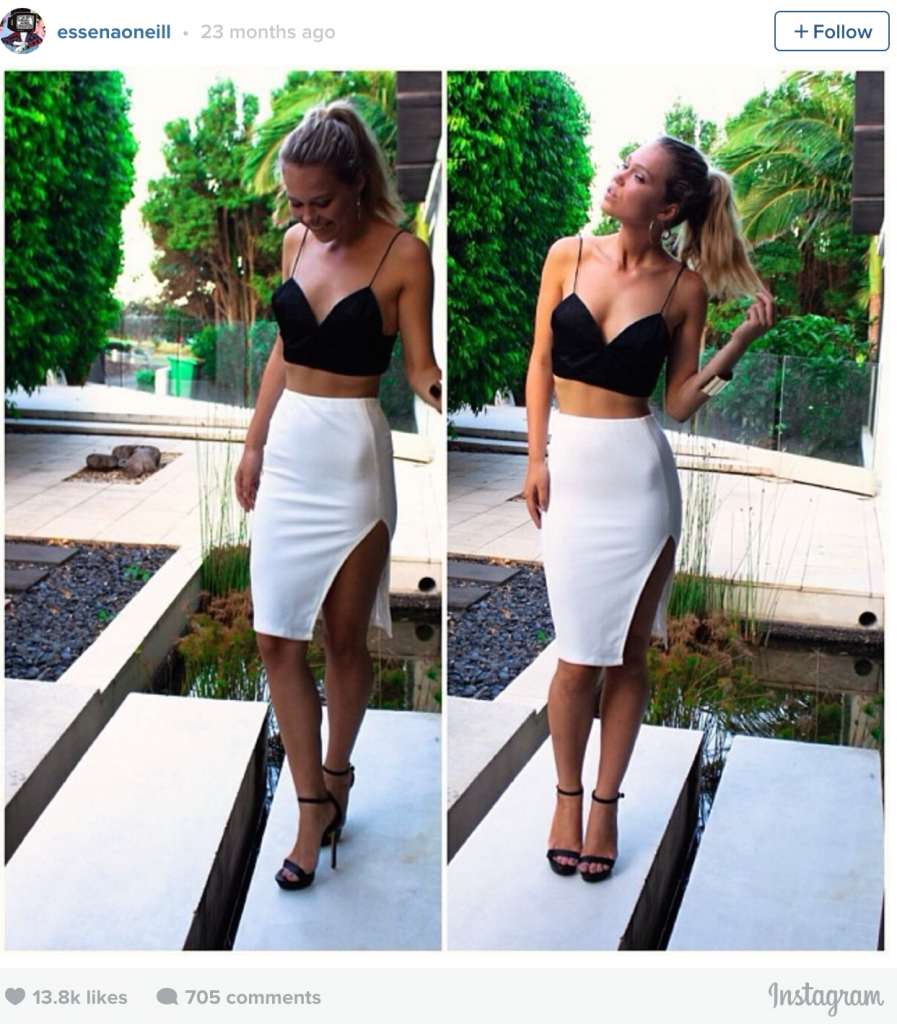 It wasn’t too long before she was getting sponsorship opportunities and was able to completely support herself. She was also offered to model in L.A.

Many young girls completely looked up to O’Neil and were even obsessed with her. Little did they know that behind that pretty face, she was totally unhappy.

“Yeah 16-year-old Essena would have been like ‘WTF girl you have the dream life,’” she wrote. “So why did I feel so lost, lonely and miserable?”

Very recently O’Neil decided that she had completely had enough and realized that she wan’t living an authentic life. She then decided to make a drastic change in her life and announced to her followers that she is quitting social media, and she has already begun editing all of the captions on her photos to tell the truth behind the pictures. 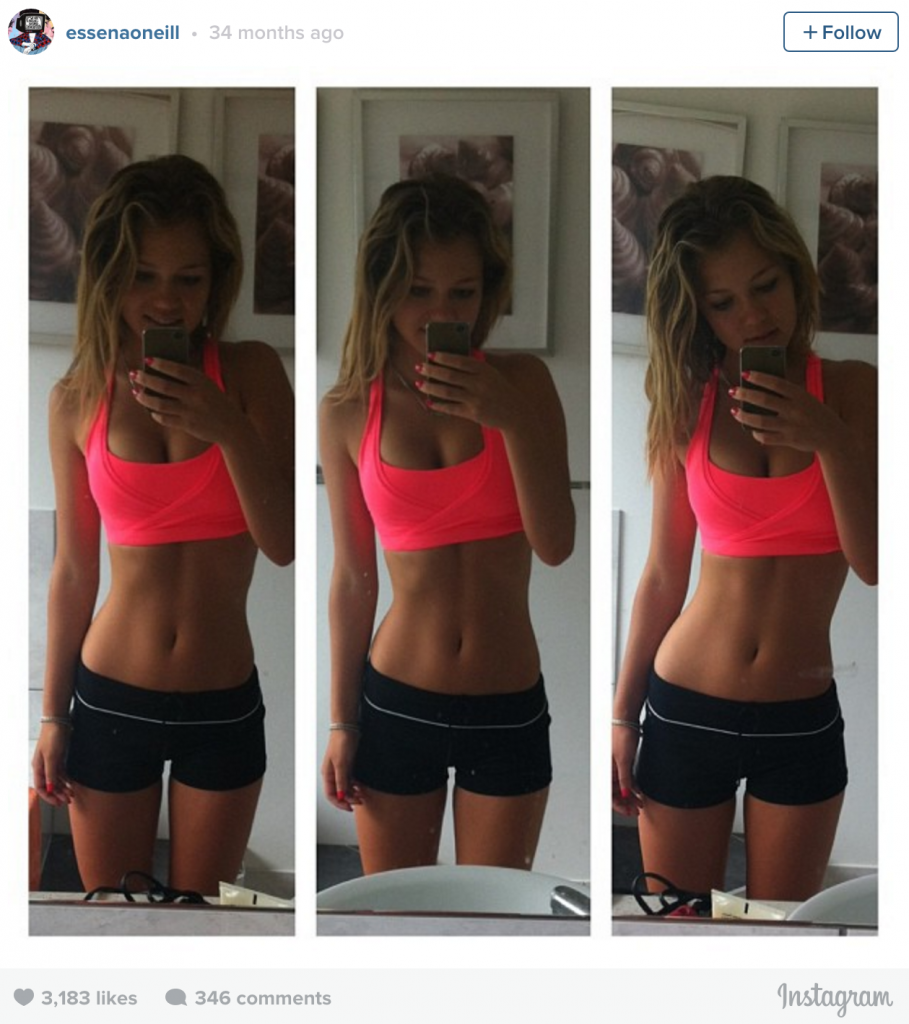 “I was addicted to what others thought of me, simply because it was so readily available,” she wrote. “I was severely addicted. I believed how many likes and followers I had correlated to how many people liked me. I didn’t even see it happening, but social media had become my sole identity. I didn’t even know what I was without it.”

Not only has she deleted her Tumblr account, but she plans to stop posting on YouTube as well. She has also deleted over 2,000 pictures from her Instagram account; she says they served no real purpose other than self-promotion.
She also went as far as to admit that her “hot body” shots were the results of unhealthy habits… 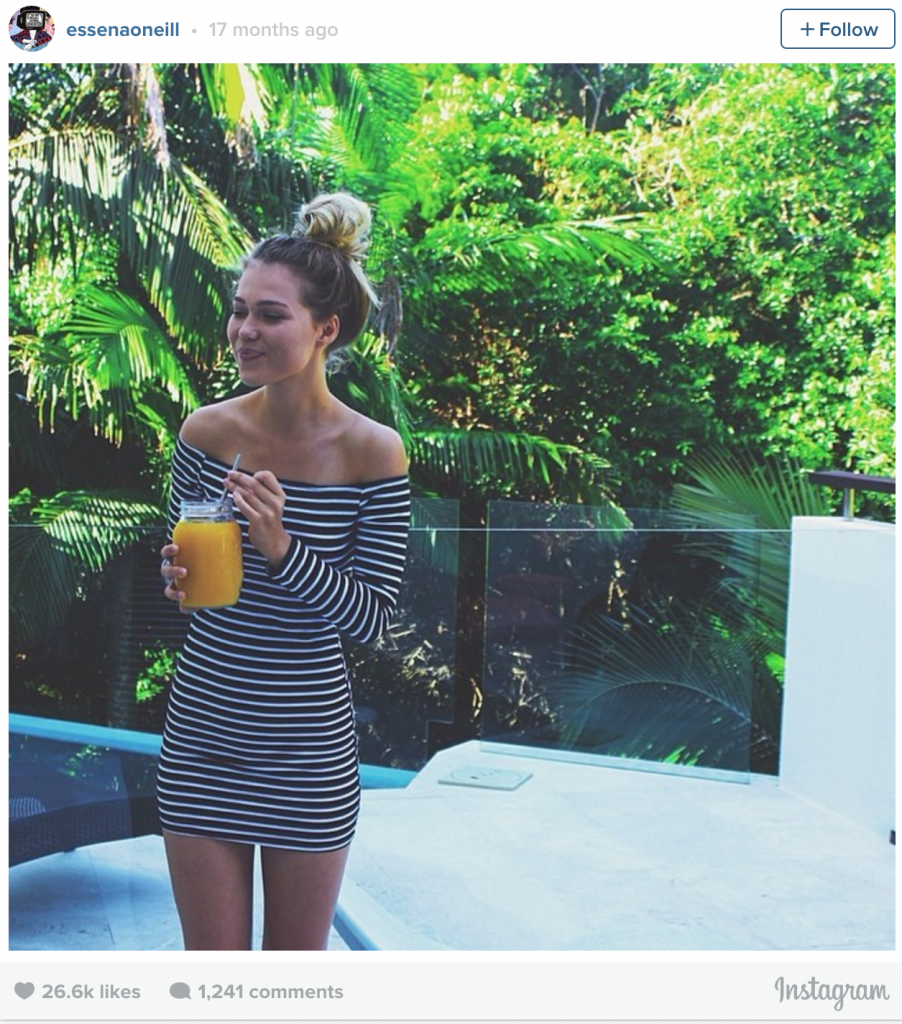 “A 15 year old girl that calorie restricts and excessively exercises is not goals. Anyone addicted to social media fame like I once was, is not in a conscious state,” she wrote on the above photo. 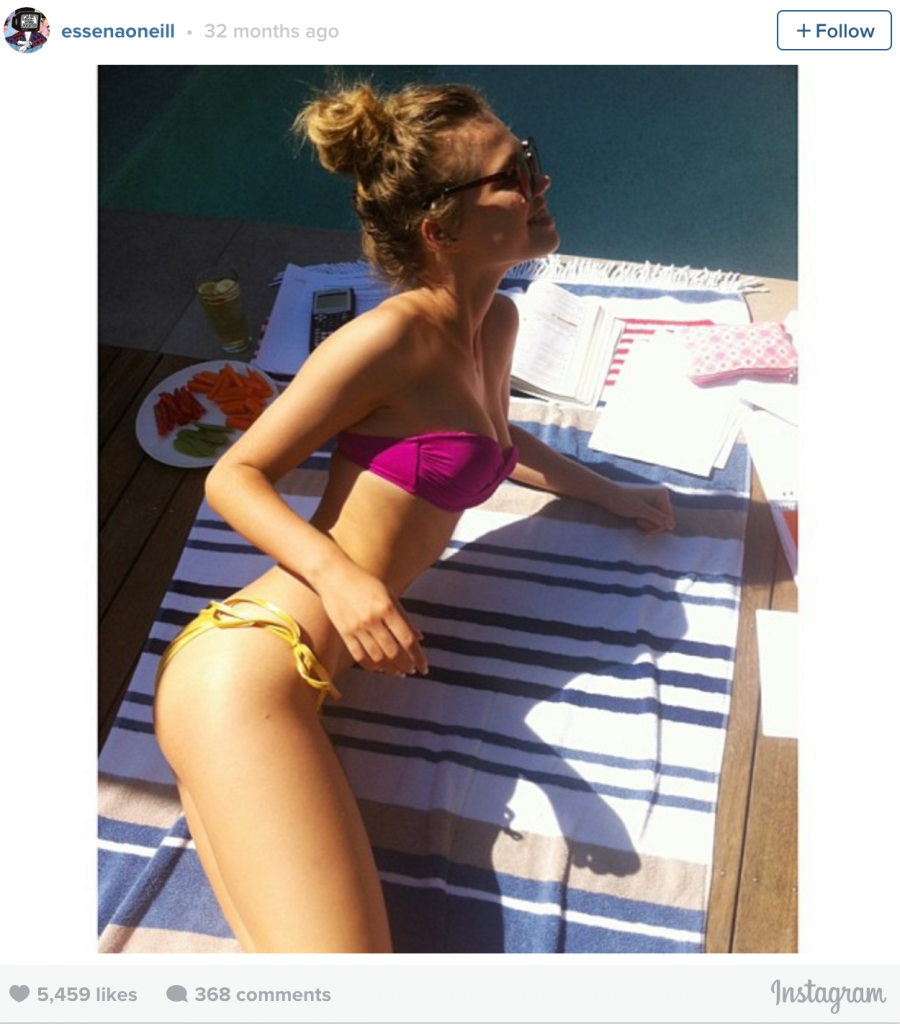 “…Stomach sucked in, strategic pose, pushed up boobs,” O’Neill wrote. “I just want younger girls to know this isn’t candid life, or cool or inspirational. Its contrived perfection made to get attention.”

“Without realizing, I’ve spent majority of my teenage life being addicted to social media, social approval, social status and my physical appearance,” she wrote. “Social media, especially how I used it, isn’t real.”
She also opened up about how she was making money from some of her posts and was completely honest about how there were no actual “candid” photos, they were all staged and even photoshopped. 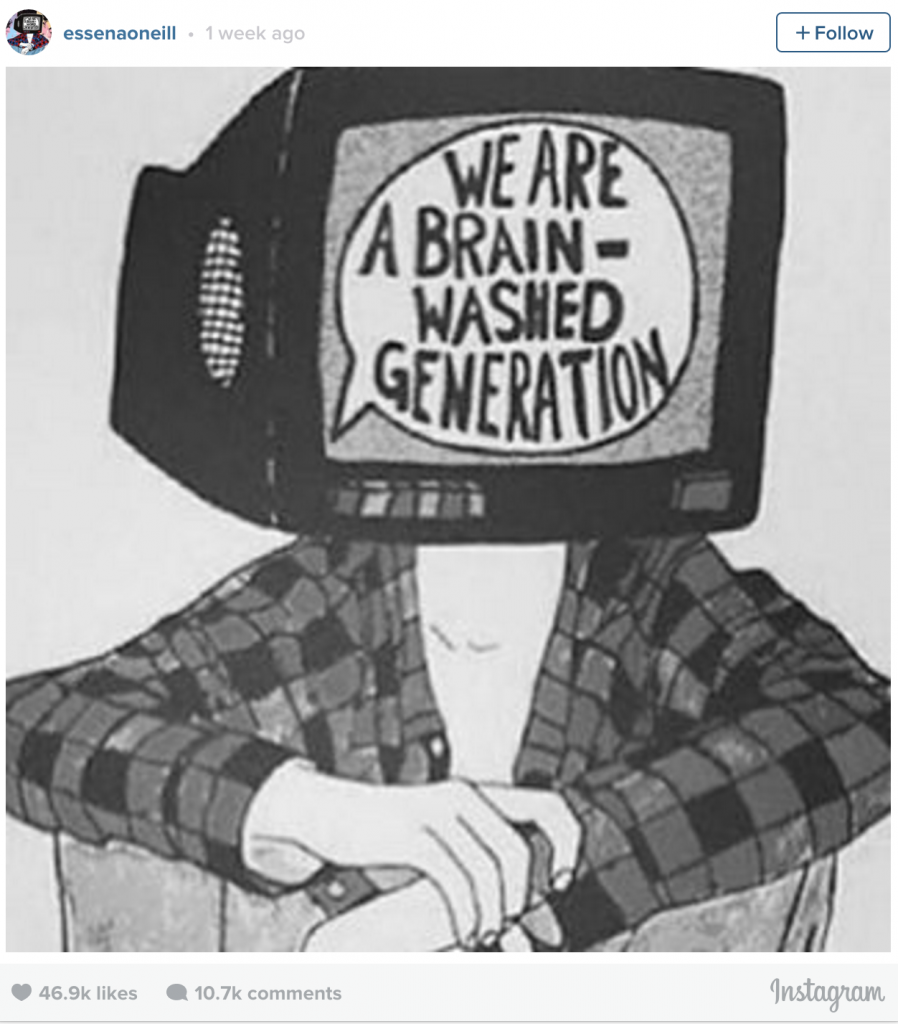 O’Neil has also started up a new website LetsBeGameChangers.com to tell her full story, she is also challenging for her fans to give up social media for 1 week. She hopes to encourage others to be present and live life, authentically.