See Here: 3 Signs You Have Low Stomach Acid (And What That Means) 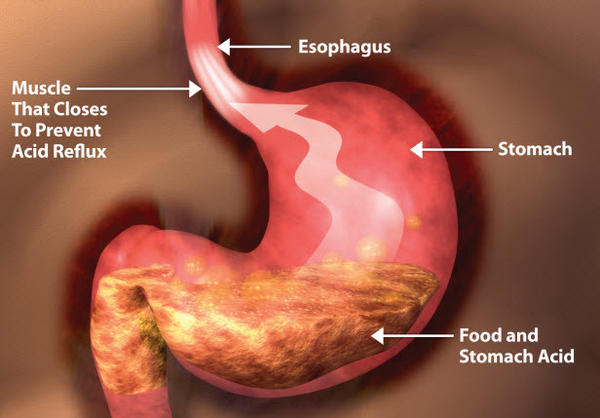 If you’re having symptoms such as acid reflux, heartburn, burping, gas, bloating, or nausea after eating, then it’s very likely that you have a stomach acid issue.
People diagnosed with gastrointestinal issues, especially inflammatory bowel diseases, Celiac disease, or IBS, are at a higher risk of having stomach acid problems. If you’ve made several diet and lifestyle changes and you’re still not seeing the results you want, low stomach acid might be holding you back.

Why Low Stomach Acid Is Bad:

1. Proper levels of stomach acid are needed to adequately absorb many nutrients including minerals (iron, copper, zinc and calcium), vitamin B12, folic acid, and proteins.
2. Stomach acid is also a crucial part of the immune system. The acid barrier of the stomach, during normal states of health, easily and quickly kills bacteria and other bugs that enter the body. It also prevents bacteria in the intestines from migrating up and colonizing the stomach.
Without appropriate amounts of stomach acid, our body’s defense system is completely compromised. What’s worse, you could be eating an all-organic and healthy diet and still become malnourished because you aren’t actually absorbing nutrients. Today, I wanted to show you the three most common patterns of low stomach acid that I’ve seen.

A pattern is an observation linking several clues together, and this pattern is much more typical in women than men. So, what’s going on here? I think it’s a two-part problem. The first is a physiological problem of low stomach acid. The second is a belief system that is created to cope with the symptoms of the physiological problem.

Mary is very in tune with her body. For as long as she can remember, she hasn’t liked eating red meat or large amounts of any meat. When pressed about it, she responds with, “I just don’t like meat, never have. I don’t like how it makes me feel.”

I think she’s totally justified and validated in her feelings. I BELIEVE she feels bad, sluggish, or nauseous when she eats a large portion of meat. And the reason is because she doesn’t have the ability to digest it. She needs more stomach acid to properly break down the protein structures. And without it, red, white, or any other kind of meat will probably make her feel worse than when she eats other types of foods that contain less protein.

If you’re someone who believes that you don’t like meat because of how it makes you feel, I challenge you to test for low stomach acid, supplement with Betaine HCL, and regain your desire to eat meat again.

It is counterintuitive to think that acid reflux is actually not too much acid but too little. But it’s actually true, despite what pharmaceutical ads might tell you or your doctor might have led you to believe.

The modern media and pharmaceutical marketing campaigns have brainwashed us to believe that acid reflux, or GERD, is due to high stomach acid levels. This is nothing more than propaganda from people who make money when you believe their message. In 2009, there were 110 million prescriptions filled for acid-suppressing drugs! Would Mother Nature create a situation in which almost 1 out of 3 people created too much acid to be healthy? I don’t think so.

What is true is that the pain you feel is coming from acid touching unprotected parts of your esophagus or stomach. But what you haven’t been told is that the body is designed to have reflux after meals!

In a normal healthy person, after each meal we’ll have 1-3 rounds of acid refluxing up to the top of the stomach and into the esophagus. The problem comes in when this normal action starts to cause pain.

Now, the cause of the pain is typically multi-faceted, but here’s an example of a very typical reason for why it’s happening:

First, a person has low acid levels, so the food sits in the stomach and instead of being broken down by acid and enzymes, it’s broken down by bacteria and yeast (which give off gas as they eat your food). This gas increases the pressure in your stomach, a.k.a intra-abdominal pressure (IAP). When IAP increases enough, it pushes open the valve at the top of the stomach and then the acid and contents in the stomach are able to constantly go into the esophagus.

This can be painful enough on its own, but over time, as this happens meal after meal, the protections in the esophagus begin to wear down and it becomes hyper-sensitive to any reflux. And, over time, this is thought to possibly lead to Barrett’s esophagus and/or cancer.

As someone who formerly suffered from heartburn and acid reflux, I know how painful and distracting it can be. Please know that no one needs to suffer from acid reflux or GERD.

(3) You Burp, Fart, or Get Bloated After Eating

After eating a meal, do you experience any of the following symptoms?

☛Several burps shortly after finishing or burps later that taste and smell bad?
☛Experience gas 1-2 hours after eating?
☛Do you get bloated after eating that lasts for a few hours?
☛A heavy feeling in your stomach – like your food just sits there?
☛If you’ve answered yes to any of those questions, it’s likely that you are suffering from low stomach acid levels.

So, why would a “YES” to these indicate low stomach acid? The likely situation is the food you ate is being fermented by bacteria/yeast, and the byproduct of their feast is gas. If your acid levels are low enough, most people will get repeated burps after eating.

Sometimes, you might even have really smelly burps several hours after eating. This is a strong indicator that the food is still in your stomach when it should be in your small intestine. The pH level of the stomach isn’t low enough to begin dumping the food into the intestines.

Bloating and farting following a meal could be explained by several problems – one of which is bacterial overgrowth in the stomach or upper small intestine. Lower acid levels would contribute to this by allowing these bacteria to live in the stomach or small intestine. There also could be a slowing of the speed of digestion, affording the bacteria longer access to the food.

I wish more people knew about stomach acid levels because they’d have much better digestion and typically better energy, and many times reflux disappears altogether. I can tell you this is based on extensive self-experimentation and working with personal clients. When someone reports any of the problems above, there is a high chance they have low stomach acid.

What to Do About Low Stomach Acid
I know you care about your health, otherwise you wouldn’t be reading this. That’s why I want to urge you to figure out if you have low stomach acid. There are some cheap and easy ways to handle this problem, achieve better digestion, and then figure out why it started in the first place.

I’ve created an affordable 3-hour program all about acid reflux and low stomach acid that shows you how to get rid of the pain, start digesting your food again, and fix the 7 root causes of stomach dysfunction.

It’s based in functional medicine and broken down into easy-to-follow steps so that anyone can understand it. You can check out the program here.

Unfortunately, low stomach acid and heartburn are complicated conditions that a magic pill (like PPI medications) simply won’t fix. However, by putting in a small amount of effort, you’ll be able to naturally and completely fix the underlying causes of these issues.