Advertisement
If you haven’t heard this story in the news, it’s because the victim isn’t a black person and the killer is not a white cop. Beautiful 19 year old Lacie Larose was killed by 39 year old Ronald Wayne McNeil over what he is crying was racism. The incident happened at a Blinn college graduation party in Texas. 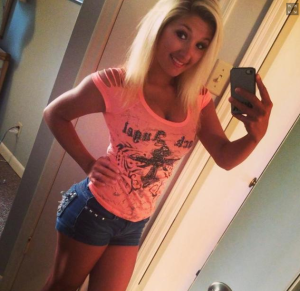 The 39-year-old alleged killer, crashed the graduation party with some of his friends. After they got in a heated argument with the host, Landon Duke, about the rules of beer pong, they were asked to leave–and a physical altercation took place, where a number of college students had to physically drag them out of the party.

“We’re a bunch of college kids. We didn’t think anything was really going to happen. Just to be safe, we closed the garage door anyway,” Duke, who graduated from Texas A&M last month, said in a phone interview with NY Daily News.

McNeil lived across the street from the party, and when Lacie went outside to get a few beers she was confronted by McNeil. This time however, he was carrying a 40-caliber Glock. McNeil allegedly fired 14 rounds, one of which hit Lacie in the neck. Two other students were injured as well, one was shot in the leg and the other was wounded by shrapnel.
McNeil is now claiming that Lacie wasn’t the only victim. McNeil says he was a victim too..of racism. He claims that the physical violence escalated because he was black. Duke said he didn’t recall any slurs being used–and that the situation only escalated into physical violence because the party crashers, including McNeil, simply refused to leave.